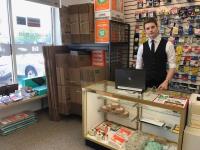 Had trouble with the app getting the lock code for key to truck. Kiosk operator was rude would have rather cancelled the rental than get the key luckily the code finally came through. Do not rent at the heartland computer kiosk rental in omaha.

Nothing everything was perfect.

The guy that gave me the keys to the U-Haul was really rude. Other than that it was a good experience. I hope I get my mileage back as I did not get any paper back from him

Please use this company they are awesome

Speed up the checkout process when doing it over the phone. It took me 30 minutes to complete it, that is way too long!

The truck check out procedure was interesting. Took too long.

The online response time was really slow, and also when we brought the vehicle back it appeared that the system went down completely. Im not sure if thie pictures I uploaded even went through. I have them on my phone if anyone needs them. We tried calling customer service but sat on hold for 15 min before we gave up and left.

My experience renting from this location was horrible. We had a pickup time for 8:30 am, and were there promptly. Since that is pre-business hours, we logged into U-Haul to do the pickup. Their software was a bust, and it just kept thinking/processing. We tried the online chat, but no one ever responded. Eventually, U-Haul called (while we were on another line holding for a human) and said they needed to confirm the phone number, because it wasn't the primary one, but the secondary? So, sometime (app hour) after holding and transferring, we finally had a code to the lockbox to get the key. Customer service added an hour onto the reservation since it took so long. The truck was fine. The return was a hot mess - we returned the truck, locked it, and put the key in the box as was signed. No one was at the store - sign on the door said they'd be back later. (Lunch?). We then left, and called to let U-Haul know we returned it, since staff was absent. That person said we should do checkout on the phone. So, we had to go back to the location and thankfully the key box was signed wrong, and has middle-school locker spinning combinations to release the key again, so we could take photos of the truck and check out that way. We then put the key in the other box that doesn't have the combination. A couple hours later, I looked at my online banking, and there was a second random charge from U-Haul. More holding, transferring to the wrong person, holding and waiting was involved on the phone. Finally, we got to a helpful and competent person who was able to identify the problem - the lady who'd added an hour to our reservation actually added a day. So, we had a pending charge for 1 more rental day + day of insurance. He fixed it, so the pending charge is expected to fall off in a few days. He was great, but everything else about this rental experience was a real dumpster fire. Over 2 hours on the phone with U-Haul fixing their issues. Numerous times we were told by customer service people that they were sorry, it was really busy because it was the last weekend of the month. This isn't your first month in business, so staff and train your team better. And get key boxes with Bluetooth - the whole process was quite archaic and frustrating.

There was lot of mud all over looks like it was used at muddy place. I would rather than cleaner vehicle.

Only issue I had was my reservation was at 9am. However, no one was there until 9:15am. However, everything else fine

Hours were not as listed

You should rebuild your computer system to be in real time results so the customer will know if they will get a truck when they order it. You should have a phone bank that will ask for a call back number if the wait time will be more than 3 minutes. Your agents should have training so they can exsplain what is going on and answer questions for your customers. Your rates may be clear to you but they are deseptive to the general public.

Three complaints: I rented a 10 foot truck, and got and was billed for a 15 foot truck. When I reserved it, i indicated i needed it until 4:30. I was getting calls at 3:10 from uHaul starting they needed the truck at 3:30. I returned it before my scheduled time. There was less than half a tank of gas... weird.

Get better computers and printers

100 miles into our trip the change oil light came on. I was moved to a different pick up location less than 24 hours hours from my pick up time, this is with a six month reservation! I was scheduled to pick up the truck at 8AM and I was moved to a different location ten miles further away that did not open until 9AM. I had to pay a moving crew an additional hour because of this!

Very good location, convenient and gas station is next to uhaul. Very fast service and staff was great. I would recommend to all of my family and friends. Thank you.

Nothing! It was perfect!

Mobile process not mobile. Rep in store didn't understand process and then switch our vehicle that was assigned via mobile process. Disappointed.