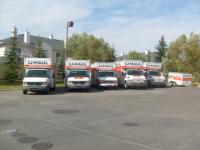 Dashboard was dirty with streaks of beverage strains on it, Cabin smelled smoking on my complaining a smell hanging tag was placed in the cabin Air conditioner not working I was told by Rep Mohammed that he will adjust charges when I return the truck but no consideration was done about it.

Excellent service, everything provided as promised.

Front left tire has visible bulges in-between treads and lost 30-40 PSI per day of travel. Rear right tire had obvious valve leak which lost 15-20 PSI per day of travel. Surge brake fluid reservoir was noticeably leaking around cap, increased fluid leaked daily. It appears the trailer was not inspected prior to renting it to myself. The inside of trailer was clean and in great condition but two of the tires and the automatic braking system were in rough condition.

This experience was absolutely horrible and I will not be returning here ever and will recommend to my friends and family to avoid this location. I've used uHaul in the past and it was smooth but I haven't had such awful service in a very long time. My suggestions: don't hassle your clients, unilaterally alter the terms of a contract, and don't double book your trucks. I booked a 6 hour truck rental for 4pm two days ahead of time. I received a call day-of asking me if I could return the truck by 9pm and was asked to come in early because he had another customer for 9. I explained that the only help I had couldn't start until 5 which is why I needed the truck for 4pm but explained that I would try to return it by 9. When I arrived at the location I was again asked to move up my return time to 8:30. I again explained that 8:30 might not be possible but I would try my best. Shortly after I received a text message that my booking was unilaterally changed so my return time was 8:30. I received a call at 7:45 (he claimed I had pocket dialed him and he was returning my call but that was not true) and he reminded me that I said I would have the truck back by 8:30 and that I shouldn't "disappoint him." I very barely managed to get the truck back by 8:40 after calling in favours and leaving my furniture on the front lawn even though it was threatening to rain (and did rain within half an hour of returning to my lawn). When I explained my experience to one of my good friends he said, "The location by Hawkwood Husky? Yep that location sucks."

Better customer service. I was treated as a second rate customer compared to other customers in the store. I had to wait for quite a while to get service despite being in line well before other people had already entered the store. While the trailer was mostly clean, it there were a couple of tissues in it and it did need a quick sweep out.

Good experience and excellent service with perfect staffs. Great thanks.

I reserved a truck for Sunday, July 26, at 7:30 about two weeks ago. I was told that the Uhaul would call me a day before the reservation for arrangement. However, nobody called me on Saturday. I called them in the afternoon, and they told me we are busy and will call you later. When they called, they told me you would receive a code right before your reservation time since our office is closed until 9 am. I had arranged everything with the building manager and two of my friends who were supposed to help me with moving. However, unfortunately, I did not receive any code. I was there at 7:30 nobody was there, nobody answered. I called the Uhaul call center. They tried to fix the issue. After talking for more than one hour, they sent me to two other branches by more than 40 KM driving. Finally, they gave me a truck after 9 am in a branch far from my address. This inconsistency was unbelievable. All in all, I want to complain, and I need a convincing answer from the company. I paid more because of the distance. You waste more than 2 hours of my friends, and I time. Even the building manager called me several times to ask why I was not on time. And you ruined my whole plan. The most annoying part is that even nobody called me after Sunday to explain this inconsistency, while several times, I asked customer service to file a complaint.

The manager was very aggressive to the customer. I used the truck for 20 miles (32km) and filled 5 litres of unlead gas. But we asked me to pay around 9 CAD more at the store. Ok, I understood, but why he was so hostile?

When arrived to pick up a trailer customer service representative was rude he told to me go to connect trailer and come back for inspection which is not my responsibility, on the trailer was damage and he didn't reported on inspection aheet, when I ask him to mark damage down, he told to me don't you worry you have full insurance on this trailer, I told him back yes I have but you still didn't marked down damage, so I left like that because he was ignoring me Poor customer service

The cab of the truck was dirty. I had to sanitize the inside before I felt comfortable driving it. In this time of covid it should be sanitized.

Good and quick service. I spent no more than five minutes to complete all the paperwork.

Trailer hitch was seized due to not being cleaned and lubricated. Tire was flat and had to fill it myself. Then had the tire blow out on the hiway and almost lost my cargo. This location was the worst to deal with. Told me incorrect info and was not helpful with the process at all.

The experience to book a trailer was horrible.I made so many calls and a few trips to the location to confirm my booking.The manger is very rude and over charged me over $93.3 pre driving on my credit card instead of $72.87 on the receipt after returning the trailer. I hope this experience would be better.

Give the unit a tune up cause the engine was kinda rough. Other than that, A-ok.

The Car dolly I rented loaded easy, and pulled great... the people at this location were helpful and treated me well. I'd rent from them again.

Just too busy. The one working couldn't properly assist everyone.

One of the agents was excellent, the other was good but easily stressed. 2 customers at the same time and he was overwhelmed.

One tire was too low to take our load and required assistance from the company we were getting our materials from. Good thing they had a compressor for filling up the tire!

The location and representative were great. I'd like to complain about UHAUL moving my truck to a location quite a bit farther away from my place resulting in increased cost and wasted time. Also, UHAUL allowed me to book for 4hrs online which but I had to drop it off when the location closed at 8:30 pm. This was barely workable for me.

I phoned before I dropped the trailer. They answered the phone and placed it on the counter. I heard him talking to customers making a sale and serving gas customers. I waited and then I called out no one answered. I could still hear what was going on in the store so I hung up. I was treated the same when I got there.

Attendant was Extremely rude and not helpful at all. He was the only one working there and it was pretty busy so it took forever to get some help with attaching our trailer properly. The inside of the store was very dirty as well.

It was incredibly terrible at my original booked location vehicle was not there. Forcing me to pick up someplace else and losing valuable moving time. On top of it all i was not even compensated for the hardship this created.

The website was complete and utter garbage. i've attempted to use the mobile check in twice now and it's been the most difficult experience i've ever had. last week i wasted two hours of my rental trying to get anything to work and ended up at the counter where the staff person was nice and finally got things resolved. i was forced to rent a second time because of the cluster fuck that was â€œmobileâ€ checkin. and today was absolutely the same thing. i was forced to go to the counter where in totally i again wasted nearly an hour. i detest your website and fully believe i'm owed a rental or money back for the frustrating inconvenience that reduced me to tears twice.