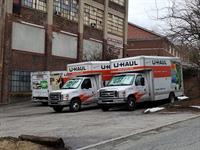 I am thinking of not doing self check out anymore; it took 45 minutes, and the call they made to my secondary contact was incredibly garbled. Better i had simply done it in person. Everything else was great!

The mobile check in process was horrible. First they wanted a second contact. Then they wanted another had to wait while they confirmed, little to no reception so had to drive back and forth up the road to complete the process. Had to fill out the same information as I already provided during the reservation process. Too many questions, took almost an hour. Waste of time. Charged for a whole extra day for keeping it 3 hours late. Charging by the mile in addition to the flat rate is a rip off.

Dropped off after hours. Signs saying where to drop off would be helpfull

Fix your app! Not only was I threatened to have my uhaul reported stolen because the app crashed but I had to drive back to the dealer to have him process it. And your people continue to harass me because the app wouldn't let me check the truck back in. If this is the stuff that dealer has to deal with every time one of these trucks goes out I feel for him.

Let people know everything ! I started off online ordering 3 weeks in advance. Examples.. if your ordering on line, just ordering not paying and then you walk in with cash they charge you a 100 dollar holding fee for paying with cash. They want a card on file so they can charge you extra charges if needed. Also when returning your vehicle they want you to submit a picture of your odometer and gas gage or they can charge you a 20 dollar fee. In other words go online to your account first before putting the keys in the drop of slot. Make sure to sweep out your truck there is a sign inside the truck that your eye does not readily catch. If you don't they charge a fee of 25 dollars. Alot of areas for them to charge you a fee and they don't tell you about any of them at pickup.

When someone reserves a truck weeks in advance, and pays for it ahead of time, you should really make sure that you have the truck available at the selected location!

Have equipment rented with my truck at the same location. I wasn't thrilled that I had to pick up the appliance dolly at another location. Would have been a time saver for me if it was inside the truck.

The truck that I picked up was dirty and hadn't been cleaned by the previous user. Passenger side mirror was broken. It doesn't instill confidence in Uhaul.

everything was perfect for my needs.

I had two issues with the pick up and the return, using the on-line pick up. I went through each of the steps requested. When I got to the final step, I got a message saying that the site could not be reached. Fortunately, there was an employee there that was able to assist me. When I returned the vehicle, I had the same issue when I got to the final step. As the business was closed, I used live chat and was able to complete the transaction. Other than those issues, everything was fine.

For the billing screw-up, I would recommend rechecking work before sending out the bill. Otherwise, everything worked out for the best.

When you advertise your trucks, don't advertise the truck as 20 feet long when the cargo space is actually under 17 feet. And of that usable space I could only use about 15 feet of the truck since 2 feet of that were above the cab. Hard to use that tiny area for furniture. Not to mention you list the dimensions as 20' when labeling the truck online but the sticker in the back of it is says 200â€ in length. That's quite irritating when you advertise the truck as 20 feet and when I pick it up and measure the inside it's around 15 of usable space. Ended up costing me more money because I couldn't fit everything. I didn't have this issue with Penske since what you order is what you actually get.

though my experience with Twin State storage was fine, my overall experience was far from it. I originally reserved a 9 ft van at Brown Enterprises in S. Londonderry Vt on Friday the 13th for pick-up on Tuesday the 17th at 4:45. I was told that a vehicle would be available, at least they would have a truck if they could not get a van. I called Tuesday morning at 10am, and was told that the truck had not yet been returned by the prior customer and that I would be notified later in the day. I called back 3 times before I finally reached someone at 2:30 and was told that the truck was still not returned and that they had not spoken to the client. I needed this truck, tonight, and was finding out at 2:30pm that they had nothing for me and no advice for me to get a truck. I called a couple of places and decided to drive over an hour to go to Claremont and pick up the truck at Twin State Storage. I had dealt with them before and the only other place I found a truck was in Springfield Vt and I do not like dealing with them. As far as I am concerned UHaul did not deliver a truck of any kind as promised. I was told from Brown's that they would cancel my order so I could reserve the other truck. I believe I am entitled to the $50 guarantee. Please get back to me and let me know your thoughts about how this was handled. I would have thought that Brown's would have been able to give me other options instead of just saying, "sorry", "good luck". Jim Nelson nhvtjimn@aol.com 603-306-4484

The exterior of the truck was covered in dirt, the windows were filthy. I had to find a car wash just so I could see out of the windows. The cab and back of the truck were not filthy but it could certainly use a cleaning. Overall it was ok. On a 90 degree day the a.c. worked perfectly!!!!

I paid for my rental in full online. When I arrived at the location I was charged and additional $18.00 and understood it to be a security deposit. When I dropped the trailer off and asked about the deposit They told me it was an additional charge, not a deposit.

The only issue is that the windows were not cleaned and they were so smeared that you could not see out of the windshied.

After hours drop off, location was very convenient.

The male working could have been more personable.

Keep doing what you are doing!

These comments have nothing to do with Twin State Storage. They were fine, and they were helpful. The UHaul reservation is HORRIBLE and a total joke. I made a reservation at least a week (if not two) in advance - but why??? The location I wanted to rent from I found out was CLOSED to UHaul rentals on the day I wanted to rent, and they did not have the trailer I was looking for! I ended up having to drive a half-hour further away, and a DAY EARLIER than what I had asked to do in my "reservation". UHaul, your reservation system is a total joke and a total fraud. Why bother making a reservation?! Fix this system!!!

I would not recommend UHaul, period. I was misled, overcharged, treated rudely and never received a call back as promised. I have been renting from UHaul for years, but not again if I can possibly help it. My original reservation had to be changed and none of the promises I was given were carried out and no-one cared and treated me like I was peon. I was originally charges about $100 more than I was quoted when UHaul had to change the vehicle I needed. Terrible customer service from supervisors also.