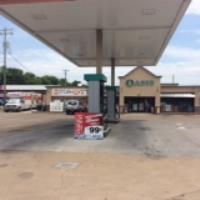 Send them to another location. The owner/person on duty at the time of pickup refused to help with the trailer. I am 68 years old and asked if he would come out to help and he said NO. I suggested he had to come help and he said "I don't have to do nothing that's your job." Fortunately for me a bystander saw me struggling and helped. The man in charge was an ASS. Will never go there again.

The man at the counter stayed on the phone with what seemed like a personal call while I stood and waited. He then had me talk to him while he remained on the phone. He was rude and abrupt. He tried to turn me away and not allow me to return the truck there because he was "full." I had to get my boyfriend to come in and help me return the truck. He did not check our equipment return or anything. We took pictures ourselves to prove everything was returned incase he tried to dispute us. We had to take a picture of the receipt on our phone because he used his ipad and was unable to print.

Was upgraded to a 26â€™ truck from a 20â€™ truck, nice gesture but was too big for parking in area moved to, this is why I ordered a 20â€™ truck to begin with. I ordered an appliance dolly for my move and wasnâ€™t told until picked the truck up that one was not available, had to waste 2 hours going to Home Depot to rent an appliance dolly for more money. The truck was dirty and there were probably 3 dozen or more moving blankets scattered in the back taking up space. In future will spend more to get better service with a different company.

This is a convenience store in a very hard to get into and out of location. Ive gotten this truck and dropped a truck off here before. There's only one employee working and takes care of his convenience store customers before they worry about uhaul, give you a key tell you the truck's outside but they never know where, you just have to go find it. They're unfriendly and hard to understand.

It would be nice if the trucks were cleaned inside regularly.

They do not have staff dedicated to UHaul. Makes the experience a little longer

I did not put on my contract a drop off point. However when I went to drop off truck close to my home I was told 1. No contract under my name 2. Truck was already returned and checked in 3. $60 fee for dropping off at a different location. The gentleman at the Dockery Rd location spent a long time on phone correcting entire issues for me. UHaul below expectations!!!

Rented a 5x8 trailer is was dirty, tires had low air pressure, taillights where missing. Refused the trailer I was directed to another trailer that was in pristine condition. Hooked up the trailer by myself paper work was not changed to reflect the different equipment number. Returned the trailer on time. 1 week and 1 day later was contacted to see if I still had the trailer. Dealer never checked in equipment. I will never rent from this dealer again.

They checked us out in the wrong truck!! Mileage was also entered wrong, so when we tried to return it via the website, it said we owed over $21,000!! Which caused us to have to leave the uhaul place and return the next morning and turn it in.

He had too many things going on at one time. Did not help undo anything. Had me come in twice. Helped other people in the convenience store while trying to fit me in.

Everything and Everyone was great! Will definitely use again .

They told me to hook the trailer up by myself and after I got someone to help me lift it in there I hooked up the lights and checked them but the sun must have been shining on the one side because they really weren't working. They never checked my wiring harness for the lights or even checked that I was using the vehicle I said that I would. Luckily I stopped at a uhaul in cape Girardeau, MO, and they not only fixed it right, they gave me a VIP certificate to cover the cost! They were awesome! I am a 54 year old woman...why would you assume that I could lift that trailer let alone know how to properly hook it up?

It would be great if they had a key box or a dedicated counter space for UHaul customers. Also, the store personnel seemed a bit confused at the process and struggled with the English language

This is a busy convenience store. One clerk cannot take care of store customers and uhaul customers at the same time. We checked in online, but it still took 45 minutes to get a trailer

You charge for the truck and then mileage on top of that you have to fill tank up which was expensive. And a limited time of usage of the truck. I thought it was a bit much.

Appeared that someone had been staying in the trailer. Which I know vendor may have not been able to control, but if they could have checked it. Vendor cleaned the trailer out after we pointed out the issue.

I asked many times for a person to.call me . I rented this trailer. Apparently no fluid in brake system found out going over mountains On 441 south ... ..had someone been using this In smaller truck it could have been disaster ... And pick up location was convenience store. No telling when fluid was checked .. no gasket Was on master cylinder when I added fluid. From now on I'll check. . Everything else was good condition. ... didnâ€™t get to move everything to Valdosta. Turned trailer in at tifton ..I would like a refund. Thanks

Truck was a bit dirty but ran well. The pickup process was pretty easy.

The customer service was pretty bad. He barely talked to me and honestly I was confused about what was going on... but it worked out so I am fine.

Don't advise customers to do business there.

I was a little nervous because there were many mixed reviews online. We had a great experience! They were quick and easy to work with! I would use them again.

Cashier didn't allow me to pay cash, put charge in my credit cards . To busy talking on phone when I pick up truck. Poor services.

This is located in a store. There was only one cashier and I waited for an hour while he waited on all his customers. I was not happy just standing in the corner feeling like my business was not as important as the peanut stuff in the store

Where to begin....from trying to charge me $364 for a quote of $207 (we were still overcharged and I will call customer service), argued with my husband he gave my husband back his drivers license when in fact it was clearly sitting in front of him to not giving us any training or assistance on how to hook up the car hauler to the tented uhaul truck. Do not recommend any one rent from this location!!