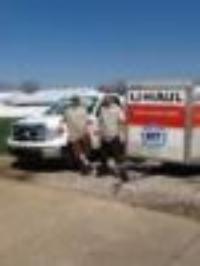 They installed the hitch UPSIDE DOWN, which meant it would SCRAPE in every driveway, low spot in a roadway, etc......LUDICROUS!

dropped the trailer had the follow up paper work with in the hour.

Did not have the size we called about and had to go up 2 sizes and spend more. I was also way overcharged for gas. 30 or 40 for 1 gallon. Had to go to their boss. Very unhappy!!

We had a reservation but employees were not concerned about our need to get on the road. Would not rent from this location again. Had appliance dolly reserved with truck. No appliance dolly. Had unlimited miles but was charged extra miles when uhaul was returned. Will look for alternative for next need when moving.

Employees did not assist me when I walked in the Business. waited 15 mins without seeing a single employee. Walked through the "employees only" door to find 2 employees sitting in the garage playing on their phones. AGAIN i had to back the trailer into a narrow space between other u-haul by MYSELF, offload the trailer MYSELF. I DO NOT PLAN TO USE U-HAUL AGAIN based on the lousy customer service for the price i paid.

They were very qualified

Reserved a dolly but one was not provided, which was a major inconvenience. We had major problems with reservations. We made a reservation 2 weeks in advance for pick up less than a mile from our moving location. The day before moving, we received an email saying the pick up site was changed to 25 miles away. We called a closer location 15 miles away and was given a confirmation for that location. Unfortunately when all was said and done, we ended up having to go to the location 25 miles away. This added 50 miles to a 200 mile move plus the extra time. Not pleased. We have no complaints with the personnel at either location, only with keeping the reservations we made locally.

I am actually disappointed in u-haul. I made my reservation online and I was given several options and I selected the one that was best for me. I was then later notified that my pickup location was changed. If my original selection was not applicable, then it should have never been offered if that location doesn't have car haulers.

I have used this location before . Nice people to do business with

The gentlemen that waited on me was so helpful and kind. Went out of his way to help me.

My problem is that any call has to go through corporate. You are on hold forever. I called speedy oyler to let them know on my way to return the truck and I was told to return it to Green River Road location because the Uhaul part closed at noon. So we drove to the Green River location and they told us they would charge me $100 to take it to St Joe for me. So we drove back to St Joe location.

There is nothing I could recommend. Location associate was friendly and helpful.

Originally wanted to rent the truck and car carrier from the riverside/41 location, stated they did not have the equipment. I then called and advised the St Joseph location I would be later then the expected time of arrival due to airplane delays. I arrived 30 minutes after initially thought I would be there. The gentleman that helped me did not seem to be in any hurry to get me in and out with my requested equipment. Asked me if I wanted to move the truck over to the car carrier to hook it up. I Asked him to do it as the truck was parked in the grass and there had been a lot of rain lately and didn't want to be responsible for landscaping being torn up from the weight of the truck. The u-haul rep said he would move it and hook up the trailer. About 10 minutes later he grabbed the keys and went to try to start the 20' truck. It would not start as someone had stole the battery. He called u-haul and I was directed to go to the riverside location where I requested to pick up my equipment originally, but was told it was not available there, but all of a sudden they have it? I have wasted about 2 hours now of trying to get a U-Haul truck and car carrier, so my packing time had been cut into and my card was charged at this location, even though I was going to rent the vehicle from the next location.

I had a most unpleasant experience at your riverside location in Evansville indiana-your holding policies need improvement-you say you can change your order but when you change a reservation you do not contact the customer!

I was charged an additional 86 cents on my checking without being contacted first. I was in the process of transferring banks. Was charged $37 by my bank for overdraft charges. I would like to be refunded this money. I was told that the mileage was already paid for the first time.

I made the reservation at East Riverside Dr location. This location was very clean and the service exceptional. The designated pick up location was different and not the same quality service.

This facility primary function was a quick lube facility. The office and waiting area were not very clean so I waited outside.

The pickup location was not the location listed on my confirmed reservation. I would not have known had I not received a confirmation phone call the day before.

the owner of the business was apparently under some sort of influence of either a legal or illegal drug and simply doesn't matter. I had to phone the Louisville office for clarification , handed the owner my phone so he could speak with them and he actually fell asleep while speaking to this person. By this time I was irate at the situation and called Louisville back and demanded assistance. No luck there either. I ended up giving my credit card to take the vehicle. I knew something was not right, and went to another location at Riverside and US 41 and asked for assistance. The two employees at that location were excellent and help me thru the issue. Turns out that the owner of the Speedy Oiler never gave me the contract papers for the truck, and I had I been stopped, I could have been arrested for a truck with no contract. Lastly, I would strongly recommend taking away this gentleman right to rent vehicles away. I have contacted the Louisville regional manager and left a message for him regarding this incident. Had I been able to walk away that day I would have.

No improvements necessary. Everything was professional!