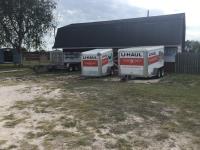 They did not get the truck I reserved and they overcharged me and didn't apologize for anything.....very unprofessional

Needed to rent the uhaul last minute and renting it went smoothly.

Easy, affordable, great customer service. Keep it up and thank you

Uhaul overall needs to do a better job of giving the customer heads up when equipment is not available or does not have equipment at a specific location. Thankfully, the owner of this location was very proactive and called me as soon as he saw that I was on his list.

Knowledgeable about UHaul product! Professional and helpful. Answered all my questions. Service Representative helped me choose just the right size to fit my moving needs. Sincerely

Better communications between the uHaul corp and the vendor. I had asked for a Cargo Van for my four day trip and was told that I would be getting one. That the vendor had talked to uHaul and they agreed. I placed my order two weeks in advance so as to be sure they could secure the Cargo Van. But when I arrived to pick up the Cargo Van, I was told they did not have one. And that I could rent the 10 x 10 truck instead. I had no choice I had an event that I had planned months ago was committed to getting there. So I felt lied to and frustrated and up against a wall. I do not know who is at fault, but I will Never recommend this place again. Don't get me wrong, the people were kind and helpful, but the service was awful.

Place said it was open online but when we got there it was closed. Luckily the U-Haul Hal made it super easy to drop it off anyway!

Tell renters about the spare tire.

Return was too hectic. Went to three dealers before one could accept it.That was a bad customer service

I drived only 3 miles and there wasn't any change in the gas sign, they took 15 dollars for gas.

The computer system was not accepting my certificate of $25. Jerry, the representative who was helping me at Farmer's Exchange, even showed me how the system would not accept my certificate. It would not give the option of accepting the certificate as a partial payment, then the remainder for my credit card. So, ultimately, the whole transaction had to be done from the start, which took a while,& I was not able to apply the $25 certificate/credit. Jerry even went above & beyond, by calling the customer service number, but was told that I had to be the one to complete my own transaction online, but I did not have access at that time. The representative on the phone could not help resolve the problem. It was very inconvenient to have to go through the whole process again, even though I had already confirmed everything was ready to go, since that same morning & even the day before when a representative called me to confirm. Turns out, the lady I spoke with, originally told me that the trailer I was reserving was not available at any other place here in Kingsville, but the one on 6th St. & one in Premont, TX, but because I had had a bad experience there with the owner, David, I refused to have to deal with him again. I mentioned to the lady that I had already called Farmer's Exchange & was told they had trailers available. I don't understand why she was re-routing me to Premont when there are two other U-Haul locations here in Kingsville! Then, she had a lot of incorrect information in the system regarding my reservation, which was frustrating! (My name, address, pick-up time was set for 5am instead of 5pm & drop-off location was set for Temple, Tx instead of Killeen, TX. Because of all this, I had to spend yet another hour on the phone with another representative, while en route to Killeen, who corrected the drop-off location. It took about a total of 3 extra hours to finally get everything on track, from the pick-up time, reservation, confirmation & drop-off). Making the reservation in advance, did not seem to do any good this time. Was also wondering if the $25 U-Haul certificate could be exchanged for a cash voucher or a general gift card, since I did not get to apply it to this transaction, even after several attempts. Jerry & another gentleman who helped me at the Farmer's Exchange were very helpful, courteous & even apologetic because of all the time it took to get this reservation completed. They showed great customer service.

make online receipts available in PDF and Jpeg format as well as png. Uhaul owes me for being asked to return the truck early. I did return it early (1 day), while I still needed it. I will be looking to rent again the week of the Sept 16th.

Actually have the right pick up location instead of sending me to a location 45 minutes away from my original location.

The location in Kingsville, Tx was great to me! They provided me with all the information I needed to know.

I understand this a new site. the folks were great and very effective with the check-in process.

The gentelman was so helpful needed to no informationand they answered all the questions we had and was very friendly.

Again everything was done as planned. Awesome!

personnel were very helpful to an old man

Customer service was excellent. I had no problems with this location.

Very professional, they had a bad storm the night before and had no power. The business was closed but when I called the emergency number and they came within five minutes so o could get the truck after driving four hours.