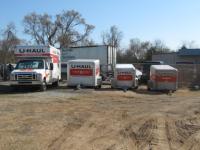 Employees were awesome and very professional.

have not got a email that i dropped it off yet

This location was very close, and worked well for me on that issue. However, this location is a tire store and that is there main concern. Staff was nice, just different than Iâ€™m used to. Slower pace in this part of the country, Iâ€™m use to very fast paced.

The place is a mess. The employee was preoccupied with his cell phone and other business while processing my rental. I called ahead to speed things up and nobody answered the phone. There were F-bombs being dropped by employees in a back room.

Seems his lunch hour is more important than a paying customer.

Easy pick up and return

Didn't interact with the employees or see the inside as I did the mobile check in which I really liked!

I had an issue with the electrical on my truck. They took the time to help track it down and get me on my way. They were an awesome help. I will definitely rent from that location again.

I didnâ€™t see anyone at either location. There was black grease on the bottom of the back door. It was not possible to open with the lift strap or bottom edge without getting heavy grease on your hands. On the ramp as well. It was also on the cargo pads which I did not order and could not use. The cab had heavy cigarette smell. Other than that, the truck was a truck.

It was convenient as a drop off location but not a location that I would prefer to pick up a rental.

I did the early Saturday morning checkout on the truck. I was suppose to have an appliance dolly on the truck. It was not there. We were able to obtain one from another source We were done with the truck in a couple of hours. We went back and personally gave the keys to the man at the desk. He told us he would "check it in later and remove the dolly from the order because he was too busy right now". This morning (Monday) we checked the website and it still had not been checked in. I went to see the dealer to get him to make sure it was checked in. He said he "would do it later because" he was too busy " If they are too busy to help me, I am" too busy to rent there again.

The mobile check in was easy, as there was no counter service on the day we needed to rent.

Met the man asked him to check the uhaul in he refused. Asked again he said to just put key in drop box and he would do it Monday. Now Iâ€™m being charged for gas. All this could have been avoided if he did his job

Typical low-rent rural rental location. The proprietor was reasonably friendly and courteous, and actually seemed to care about me the customer.

Top knotch people.. Very knowledgeable.. Got me the right equiptment for the job.

I was given an appliance dolly that had mud all over the wheels. I could hardly roll it to the truck. Also, one of the wheels was not working correctly which made it incredibly difficult to use the dolly at all.

Need tounge jacks. Too heavy for 1 person to maneuver.

This does not reflect on the location, but rather on uhaul the company itself. I made a reservation online on Friday. On Saturday, I called the place (A1 Barn Sales) to make sure they had a trailer present. They did not. (totally understand, it happens, not their fault) I called Uhaul to reroute me to a place that did, which they were able to and also told me I would get a $50 credit for my trouble. Good policy, happy about that. When I got the second place to pick up the trailer, I was told I had an e-alert on my account and could not rent. Called the number they gave me and was told I had a charge from over 5 years ago that had not been paid from A1 Barn Sales and I could not rent until they released it. First I have heard of it and I have rented from A1 4 or 5 times in that period. (Happy to pay if I owed, but didn't think I owed anything. Customer service rep was very rude and hung up on me) Called A1, they had no idea what I was talking about. They called UHaul and told them but Uhaul still insisted I pay the charge before renting, unless I wanted to contest it which could take a week. Had to move that day, so I had no choice but to pay the charge, which I am still not sure I even owed. (no other place to rent a trailer, which I would have done due to the way I was treated) The second customer service rep I talked to was more helpful, but still very condescending. Now, the charge was not all that much ($67 or something) but the real issue here (and reason I am taking the time to write this) is that it is a perfect example of customer service gone bad. When I made the reservation online, I should have been notified that there was an issue, that way it could have been resolved prior to starting the move. (or even when I called uhaul to be rerouted) At the very least, because the amount was less that $100, and it was a Saturday, I should have been able to rent the trailer without taking a couple of extra hours out of a day that I had to be moving and resolve the issue afterwards. Lastly, becuase this supposed unpaid charge happened 5 years ago, and the dealer had no record of it (and neither do I) it likely should have been dismissed. Any one these would have made me a much happier customer. Now I realize that in many places uhaul has a monopoly on this sort of business, but there is enough disruption in big industries these days such as Uber, that the best policy is to always treat your customers as if they could go somewhere else. Thanks!

I ordered a 26' truck and the vendor said he they didn't bring one. This cost me an additional $50-$75 dollars because I had to make additional trips to get me moved.

Was very difficult to reach by phone

Charged a cleaning fee to my card. Why? We brought furniture, nothing dirty.

Very nice people to work with

I reserved, and even checked in online to save time. But when I got there he didn't know I was coming. I waited because it's a mechanics shop and he was talking to someone about a car. I understand he was alone. It just sucks to not have gotten out of there until well past 130 when pick up time was 1. Nice enough guy though.