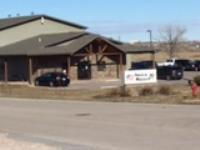 The truck was very dirty outside. The front end was most dirty, especially the windshield as it was covered in dead bugs.

Nobody new what they were doing.

The "technician" that hooked up my trailer, Charles, could have killed someone. I think he was under the impression that I was a clueless trailer drier and so he could get away with anything. Didn't cross chains, didn't even hook up the third safety chain, didn't check equipment, didn't check lights' didn't hook up brake lights, didn't check tire pressures, didn't check if the trailer was clean, didn't take a photo of his work. He seriously could have killed someone on the road and it would have been on my dime. A HUGE thank you goes out to Paul Lewis the owner at the U-haul in Rapid City South Dakota, he most likely saved lives by doing all of the checks that Charles at America's mailbox neglected to do. He needed to do a ton of things to make the trailer right and safe for me to drive down. He changed a tire with less than half of the safe pressure, he replaced a wire harness for the brake lights that was completely severed, he changed eh license plate light which was out (ILLEGAL TO DRIVE LIKE THAT), he replaced the third safety chain, and he made sure everything worked. I would NEVER recommend anyone who cares about their own lives and the lives of others to deal with Charles at americas mailbox in Rapid City South Dakota, but I would certainly recommend the U-haul office in Rapid City South Dakota and to deal with Paul Lewis. To be honest, I would expect a full or partial refund for the trouble we experienced. The time we lost due to this extravaganza was huge, and on top of that we could have killed someone on the road.

The man who helped us had to be called from someplace in the back. 10 mi yes later he shows up lookin Ike a drunk who had a hard night. His clothing was disheveled,hair was uncombed, and I doubt he ever trims his shaggy beard or brushes his teeth. He never sent the email with the receipt. I had to call to have it sent.

the parking lot where I picked up the trailer was a wet and muddy mess.

contract entered at Omaha and Deadwood Ave location. Had to go across town to find the truck at America Motel. Poor management.

Don't double book trucks. I booked a truck almost 3 weeks before my move. The day of the move: I caught a ride from a friend to get my truck. My scheduled truck wasn't there for pickup at the location and all other trucks were booked. I was sent to another location. I again called my friend for a ride. We get there and that location didn't open for another two hours. Saw one truck there. Friend took me home. Sat on phone to confirm with uhaul for 20 minutes before I was transfered but then i was mysteriously cut off. Called uhaul back and was on hold as i drove the car to the first uhaul location. Begged person who answered not to let me get cut off again so I can get confirmation of the truck availability as I get to the uhaul store. I confirm on the phone there is a reservation for a truck at the other location. I pick up a hand truck and a couple mattress covers because it didn't look like other location had any of that stuff. Lady felt sorry for me because of the problems and let me use hand truck free of charge. That helps me none. I get reimbersed for the move from my employer. I go home and for the third time call my friend for a ride. I get to the uhaul location and find out truck is booked by the uhaul contractor for the next day and he did not want to let it go. He called uhaul scheduling because I was was not leaving until somone got this situation figured out. I was asked to drive to next nearest uhaul that had a truck which was 55 miles away. I told them I can't because I don't have a ride and movers coming in 30 minutes. I previously called my movers when things looked like I was go in to be late and was told rescheduling that day wouldn't work for them. At uhaul the guy helping me was told by scheduling to give me a truck and they would re-route one for him. I get the truck. Movers come as I get to my house load. Loaded. Then I have to go to first uhaul to get the car dolly (other store did not have anything like that. I go back home load car and on my way. Uhaul you get an F for your scheduling office.

Drop off was easy.

Reserved a 20ft with auto transport online. When I arrived only a 26 was available and it had a auto dolly attached 2 wheel only. I was told that he might have an auto transport, but not sure. After 20 min of calling other uhaul locations he ended up finding an auto transport for us. He showed me how to,hook it up and sent me on my way home a 15 min drive. Upon arriving home my wife tells me that there are no brake lights on the auto transport. When I called to ask about it be said that he might have a cable for that, but he wasn't sure. We then received a call back that he would have them,waiting for us so I had to drive back to pick them up.....oh I forgot to mention we had movers meeting us on the clock. We were late meeting them and had to pay them extra for waiting. Thanks for the confusion and stress on the start of our 3 day move it made a less than enjoyable experience worse. Would have been nice if they were organized.

You wouldn't let me rent a trailer big enough for my needs to take out of state. I had to leave stuff behind because I didn't have enough room in your trailer.

Super slow check in even first thing in the morning. Everyone was super friendly though!

Make sure equipment is in working condition and tires are not flat. Cost me 27 dollars to get a flat tire repaired in South Dakota before I could use trailer. Train personnel on computer. I got charged 70 dollars for safe tow insurance even though I had declined it in my online check-in because USAA provides my towing insurance. I didn't get informed that he added it until my card had been a charged.

I changed my preferred pickup place to here adding 50 miles to my trip. First of all, when I got there the dropoff place had been changed to a state on the other side of the country from where it was supposed to be. They had to call uhaul to figure out how to fix it. Then, I noticed the allowed mileage was 50 miles less than my original reservation. Instead of adding 50 miles to my original allowed mileage, they had taken 50 miles off. I explained why I needed the extra 100 miles and they changed it. It wasn't until I turned the rig in that I found out the idiots didn't add 50 miles to the original mileage, they added it to the total they had come up with. I ended up having to pay over $20 extra because they couldn't figure out what they were doing. My experience other times with uhaul have always been good. I was surprised at these people. Get them some serious training!

We were supposed to pick up at a location closer to our home and were moved the day before after 4 PM! This location was closed on Sunday which was our reservation day! Why would we be moved to an inconvenient location that was closed? To say I was unhappy and angry is a severe understatement!!!

I made a reservation three weeks in advance only to be told the day before that there was no truck to be had. Had to spend half day calling around to other locations to try make something work. Why couldn't the operator that called me from Fargo help me find other options. I understand that trucks break and reservations don't always work, but was told "we can't help you" and then hung up on. Very, very poor customer service! And when we did find a truck to use, it had a flat tire. That was another three hours of phone calls to arrange for that service thru U-Haul.

This place should not be used for a U-Haul rental location. There are too many job functions for the person doing the renting to be effective and efficient.

I went there to pick up a truck at 8am, it wasn't open! I went to a side door and asked if this was the place, a woman said I'll open up. They said they weren't open until 9am but were helpful getting me going. They said they were not aware of my rental. I had called them the day before and no one answered. Not their fault but I requested another location on my rental application and was sent here instead!

They just sent me to a parking area...no one help me unhook the trailer...waited for someone to inspect trailer and accept it....nobody came out...so I drove back to office wondering what I should do about leaving trailer? They said I could go and they would inspect it later?? After 1800 miles of towing...we left....

I ordered my UHaul from your Deadwood Avenue location in Rapid City, very close to my home. They had three 8x5 trailers on the lot. You sent me one half an hour each way out of my way to the Americas Way location. They didn't know how to use the software very well, only had one trailer this size and no moving blankets. It took nearly an hour to get thorough it. I had to go to the Deadwood Avenue location after all to get the blankets. I am very disappointed in this transaction. I will not use the on line order again but will go to the location I choose and work directly with them. People reading this review: double check your confirmation, it may not be what you ordered.

This location needs over help

As always uhaul was spectacular to deal with!