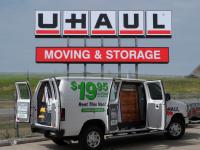 Really appreciated the price for the use of the van, but thank the truck was hard to drive, loose steering, ac would go in and out, it's 100 plus in Texas, and mirrors move which make it hard to see with the giant blind spots! I did not really enjoy the service, the advisor was distracted with other things going on at the counter and seemed to take way longer to get the paper work ready when there were 4 others working the counter as well. The return experience was fast quick and efficient.

Picked up the truck on a Sat morning. For the longest time, there was only one person working the desk. I took me almost an hour to get my trailer.

Nothing at all, keep up the great work and service

Had a reservation before i arrived, and there was so much confusion regarding a debit or credit card that was never discussed when reservation was made with debit card.. Found out when i arrived that the pickup i was to rent had to be a credit card only yet i reserved with a debit card...so much nonsense

We had a 1,200 mile move, the equipment was superb. Customer service was amazing!

The sales person tried to refuse to check my equipment back in. Said I had to use my phone which I didn't have. Then told me there was a $20 convenience fee. I told her I was on time returning the trailer and did not want to incur a late fee to go home and get my phone. The manager was great. Said your all checked in and not to worry. Please educate your staff on procedures during business hours rather than after hours.

I've been using U-haul for some years renting trucks 3 to 5 times a year. So i was very surprised how dirty the truck was and how unapologetic the staff was when i brought this to their attention. the The exterior of the truck was dirty, not a problem didn't mention it. but as i drove off i noticed the interior still had food and candy in it. So it was clear the cab hadn't been wiped clean. With covid being a real issue. I felt that was unfair to me as a customer.

Long wait time. I waited in line about 20 minutes to speak with an associate.

It was kind of hectic. I had to flag someone down while drive a huge truck and auto transport trailer... they should have a designated sign and spot with a worker there that says return here so you can drive straight to it.

For the next customary, I suggest you clean the van inside and out. Remove the trash, crushed up crackers and lollipop stuck in cup holders from previous renter. When the customer complains about the filth, give them another van rather than ignoring them. The customer service at this location is nonexistent.

I would like a loaner hitch, instead of having to buy one for one trailer pull.

We returned the vehicle during business hours on Sunday and an employee assisted us. However on Monday we were charged $20 for an after hour drop fee and told their records indicate we returned after they had closed. The store refused to refund the charge.

Gloria, Justin and the entire team seem to work well under pressure with numerous types of customer needs. Fine group of employees.

I had a terrible experience at this Uhaul location. I did everything on my end to complete a counter free experience. Expectations were set that I would not have to go into the store at all. I was approved for my rental by a virtual agent, but my dolly and furniture pads the virtual agent told me should be in there were not and I was told I would have to go inside. There was a very long line and only one employee, Gloria. I let Gloria know I was already not happy that my rental wasn't ready, she did not acknowledge my frustration with the situation because at this point, I was already late into my rental start time. She seemed very confused as to what Ive already paid for, offering me insurance that I already got and not sure which dolly I was supposed to get. Once she finally figured it out she said she was going to go get the truck. She told me to show my phone to Israel who just showed up at the counter that I completed the phone pick up. I tried to show him and he told me he was already helping someone. I told him Gloria told me to show him my phone and he had just sat down so they should do a better job of being on the same page. At this point the customer service manager I was speaking with on the phone, Miranda offered me a $20 credit and asked me if I wanted a call from the general manager which I did. I headed out to the front to meet Gloria and I heard Israel say something under his breath. I turned back around to ask him what he said and he responded, "Have a fantastic move" in a way that sounded fake. I waited outside for Gloria while on the phone with a customer service manager. My spouse offered me to come inside the our vehicle, but I declined to make sure Gloria saw me. At around 5:25pm I looked back inside and Gloria was inside. I went inside and she said the truck is in the bay, I looked for you. I was so angry. I had been waiting outside in the sun for almost half an hour waiting for her. I turned on the truck and the check engine light was on. I had to call over a tech to take a look. He wanted me to wait even longer to let him figure out what was wrong with it after he read out a few codes to someone over walkie. I told him absolutley not, I was already into my rental time. I called Miranda back to tell her there was another problem. She told me a at this point there was nothing else she could do, but have the general manager call me back. I got my replacement and finally on my way at almost 6pm. I have at this point returned my rental and still have not gotten a call. This branch was completely unacceptable.

I tried to point out a dangerous situation from damage caused by a previous renter. Staff delayed my check in to confirm I was not responsible for damage. My truck was turned in a day early. The next day I was contacted by Uhaul and told I had not turned in my equipment on time. I then had to make multiple calls to fix the situation. In the middle of confirming the damage my equipment was not checked in.

Rep behind the counter was very helpful

Clerk was unprofessional. I had a reservation for 4PM did not leave facility till after 445PM. There was only one customer before me and she was rude to them as well. I was told that emergency contact needed to be verified when I asked about this policy, as I frequently rent equipment and have never had this happen I was told it's been Uhaul policy for years. I commented that I had never had this done before and was just curious as to why the customer before me did not have his contact called. I was responded to with further rudeness and threatened to have service refused. I have never been treated disrespectful at any other Uhaul locations and will not return to this location ever again.

Difficult times for everyone, pleasantly surprised to see such effort and dedication to their jobs.

CrÃ©ate a QR code on the contract that is unit specific and takes us directly to the specific drop off portion of your website to take the picture. Your current process wasted over 30 minutes of my time last night.

Staff was professional and courteous!