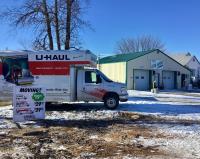 Don't know if there's anything you could do . He is a great representative for U-Haul

Waited an hour after calling and was told they would be there in twenty minutes. I was told I could have just dropped the key in the box when the individual showed up. The person I spoke to was very pleasant and was surprised I waited. Wish I would have known that because it was like 35 degrees plus humidity and I have copd so it was difficult to breathe while waiting. But I'm over it now and would recommend the location as they were pleasant to deal with

Have someone available to speak to in person at the location during hours of operation.

Ready on time as expected, no problems

Excellent service from Fred. Thanks a lot

The location was fine but we were not prepared at all to have to hook up a trailer to the truck or to secure our car to the trailer by ourselves. The UHaul location owner was very nice and helped us out but told us that he was not expected to do so by the company and was not liable if it wasn't done properly. He also recommended watching a youtube video to learn how to do this properly. I feel strongly that we should have known about this prior to arriving at the location and would have liked the customer service rep to have prepared us for this.

Put jacks on your trailers, so when we drop off we don't have to call for help! One person can not remove u-haul from vehicle by themselves without a jack of some sort on hictch! Also don't over charge people. I was over charged on my credit card by $20.oo and made 2 calls that it was returned on time, but still got charged. Also then had to call whom I rented it from, that I was over charged, he is currently looking into it! That is not good business! Although the person whom rented to me was awesome!

The truck was as dirty as it could possibly be. The fact that it was picked up from a car wash location and it was not clean was disturbing. We only received half of the moving blankets we requested. There is no printer at this location so we had to call U-Haul to have a copy of our invoice emailed to us so we could then print a copy at our hotel. Seeing at it was a cross border move the paperwork was extremely important. The gentleman that works at this location could benefit from some customer experience training as he was not representing U-Haul very well and using language that was quite disturbing.

I'd still like a copy of the bill please and thank you.

Prompt and professional, I have rented here several times and will rent here again. 2 thumbs up.

We were not given the dolly that we paid for and then we were charged for a missing dolly. Over all not pleased. We were told it was a 24 hour rental and we had to have the truck back for 8am the next day. We returned it for 8am, then were charged an after hours fee for dropping it off after hours. So here we are with all these additional charges...not impressed.

I received awesome customer service and help! Not really much you can improve on. Highly recommend!!

Dealer added in insurance without asking me to the price but i had rented before and knew this, so I asked him I dont have to take insurance if I dont have too. I was charged for 2 days and I only had trailer for 5 hours. I called this character a few times, said hes talking to someone about it. I then phoned the Co. myself and now waiting for an answer. I also have a few witnesses that I used it for only 5 hours. NOW IM WONDERING WHOM FILLED IN THOSE TIMES

Provide better customer support. This whole rental was a fiasco. I will never use uhaul again. Not only did I have to drive to another town to pick up my vehicle, a smaller one than I had ordered, but when I arrived, the person was in a hurry, there was no gas cap on the truck and I couldn't adjust the mirrors. He only provided me with 4 furniture covers when I had ordered and paid for 24. He then left the premises and I was left to fend for myself trying to fix the mirrors. I had to drive the vehicle to a uhaul centre on the complete opposite end of Winnipeg to get the gas cap replaced and the mirrors adjusted. I burned a quarter of a tank of gas getting there and wasted a whole day. I placed several calls to the service line and the only thing I received was a refund on the blankets. No provisions for the gas i used or the extra mileage to get to the uhaul repair centre. I will never use their services again.

I initially booked online for Winnipeg as the on line booking said they had what i needed. I received a call saying despite the online confirmation they had what I needed that indeed they did not have the right item. They redirected me to another location that had the right rental item I needed. I called and confirmed with that location, picked it up, paid and dropped it off on schedule. Great. Several days later I received a call from the original booking location that I had not returned the item yet. i explained that i hadn't rented anything from their location, but had picked up and dropped off my rental unit already from another location (several days prior). They said "oh, ok,. sorry" but then billed my credit card for late charges. So, no, I am not a happy customer of the corporate entity, although every aspect of my service need was met by the local provider.

didnt put the correct time of drop off in so we were charged for another day. NEVER USING UHAUL AGAIN

someone should check the box where keys are dropped when the office is closed. my rental was due back at 5:00 pm. I dropped the keys in box at 1:02 pm. the bill showed the keys were dropped off at 7:51 pm. I was charged an extra day + taxes. this is cheating the customer.

The owner went out of his way to provide excellent service. There were issues with the safety chains which were quickly resolved.

Very good customer service. Highly recommend this location and would use them again.

Having a u-haul location at a car wash and gas station across the street is very convenient. Though if you bring the truck back late at night the gas station is not open 24 hour.