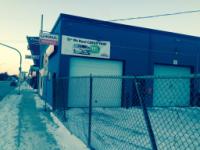 This appears to be a sketchy part of town. We dropped off the vehicle after hours and did not feel safe at all. Had we known where the drop off site was, we would have dropped it off during business hours.

This location is quite scary and dirty and unkept. Will not choose this location again and will be highly and actively NOT recommending this address as a pickup location. Process overall for truck share was convenient and easy to understand. Customer service was prompt and knowledgeable to my questions and concerns. I am overall happy with renting through uHaul truck services. MovingHelp was excellent as well. Two gentlemen that came to help was very kind and strong and work quickly and safely. Felt very satisfied with the service provided. Location of the pickup was absolutely horrendous and borders on personal safety. Please remove this location as an option for pickup in the downtown area.

Very unprofessional. By the time came to this location sign was showing open but the door was locked. I went back there was shop they say it the same business gave me phone 204-9996349 to call . I have called to person he said he will be there in 10 mins he finally came in 30 mins during this time Uhaul shop very show its open ed. At the time of Contract, I have pointed out Dani Awasti you have entered wrong address and have texted him the correct address right away as per his request on his cell phone. Never got the right address. this is my business expenses. he has completely screwed the documents.

I have never spent as much time picking up a uhaul at any other location as I did here. The boss wasn't in. Got his number from an employee. Said he would call right back. Didn't. Had to call him again. Took a half hour to pick up a truck I prebooked online. Stinky little auto repair facility.

The owner is a Straight up crook. He didn't show up to give me my truck for my 10 am appointment until 11am and then wouldn't give me my full time with the truck. He also double charged me, and gave me a number to call for his â€œbossâ€ to try to reverse half the charge. . I've been calling since last Friday and it is now Wednesday with no return phone call. Horrible experience, big joke of a location. Wouldn't recommend

I arrived at the location and it was â€œclosedâ€. Thankfully an employee was walking in between shops and noticed me And told me the same thing. When I informed him that I have a uhaul scheduled here he was surprised and called the owner. The owner explained that I would need to do an online check in (which is fine, I expected that) and then their employee would give me the keys (which are inside the locked shop)... After getting the keys I had to cross a busy street to go to a side street where the truck was parked. I started up the truck and finished the check in process. The truck had couch legs and a couple other things in the cab from a previous move that clattered and got in the way. Additionally the truck was covered in 6â€ of snow and ice and there was no snow Brush to be found anywhere. Overall, I've used Uhaul previously and been a satisfied customer. This is the first time I've picked up at an alternate location. Next time I will definitely only deal with a proper uhaul store where there are people to help address any issues that are found. Definitely never using an alternate location like blue line auto again. In my previous experience a check in and pickup of the truck takes maybe 10 minutes... this took over a hour.

could not get through by phone when I wanted to book a truck, so I ended up calling the customer service line. When grabbing the uhaul, I had wait over 30 minutes to receive the keys. When returning the usual, no one was at the front desk to speak to at approximately 3:30pm. Overall, customer service experience was very poor.

The person renting me the truck was 30 minutes late. The reservation was for 12, and it was 12:50 by the time I drove away, and then I got an email from uhaul saying the truck had to be returned by 12:30. When I called customer service last night to explain what happened and to ask if I could return the truck at 1 PM, the woman told me it was not possible. So, basically, no customer service . U-Haul does not care about their customers, obviously. If I was renting a truck to someone and I was 30 minutes late, possibly making them late for their appointments and obligations, I would tell them they can return it and hour later. That's called customer service and taking ownership for your mistakes.

The service rep was excellent, very friendly and easy to work with, but the location was not in a great area of the city (for convenience or comfort, I wouldn't leave my own car there while using the truck)

When no truck was available, they found us one at the last minute Thank you for doing that for us Would rent again Thank you

The truck we received is not equipped for anyone to drive and is VERY unsafe. The alignment was off, tires were were worn off and two of them were worse then the others, same thing for the shocks. On your site it says the tank takes 40 gallons which is either untrue or the gas was leaking because it didn't go for more than 200km before it needed a refill. Bottom line I'll ever rent Uhaul again. This was all on top off all the problems we had the day before the move when you guys would say one min we have no truck and next we do.

This is a terrible pick up location. No one was at the shop for us, and even then when someone came, they weren't ready for us to take our truck. I would not go back to this location at all.

This pick up location is absolutely terrible. It was not open at 10:00 when I was scheduled to pick up the truck. After waiting 15 minutes I phoned the company and the owner informed an employee to let me inside. However, he let us in to the entrance and left. I waited a while longer before phoning the owner again. He informed the worker he was supposed to give me the key which I received much later than I should have. Not only did I waste this my time, but upon inspecting the truck I found out the utility dolly I rented wasn't there. After yet another phone call I was able to locate a dolly in the shop; however it was an appliance dolly and not the utility dolly I ordered 18 days earlier. The owner said I could use it but it would result in higher charges because of the different type of dolly which I didn't want. There is no reason to have this location as a pick up location. I would rather carry everything by hand than deal with them.

Never again will I rent from this specific store location. Why? Very unprofessional business practices, very late with schedules, and created more cost for myself (due to long wait times on their part). If you are set on renting from U-Haul, rent from the main store and not from 1080 Arlington St. Wpg, MB. Trust me, you will save yourself time, money, and headache by not going to this store.

Firstly, the pick up office location was full of junk, filthy and some staff guy came out of the back to state at me like a creep the entire time I was in there. Thats how it started which was bad enough. Then we get to the order. I had ordered two dollies, a furniture dolly, and a bunch of moving blankets. The person helping me had no idea I had ordered anything somehow and only had a few blankets available. Then he suggested I just run over to another location where they probably have more stuff available. Really? I preordered this stuff because I don't have time to be running around town looking for it when I also have movers to meet up with and a ton of other things to do. So we finally get in the truck and it has less than a quarter tank of gas in it for the day. That's excellent because you definitely want the added stress of worrying about whether you'll have enough gas to do what you need to do. I barely made it. The guy at the store gave me a booking sheet that said it was a quarter full too so I let him know it definitely wasn't. Just as an aside, if your launching the site from Canada, prices in Canadian dollars would be smart. I was a little surprised to discover a much higher charge for my moving help add on than what I thought I was paying ,after the exchange. Helpers from Elite were excellent, but the rest of the experience was pretty awful.

Had an absolute horrible experience. Firstly we picked up our uhaul from a poor uhaul vendor. Where we completed our transaction via FaceTime. We also were not given a proper confirmation of sale. The truck was dirty and we never received a walk through. The quote has in the car was less then there actually was. Once we came to Calgary we were not compensated for early drop off. I would NEVER recommend uhaul and specifically would warn against picking up from the BlueLine location on Arlington Ave in Winnipeg. Extremely poor service. I will be following up with head office to ensure that location is not longer used.

Had a mini-heart attack when I received an email saying the truck hadn't been returned, when I returned it the very same night I rented it... Also booked a furniture dolly, which wasn't available when I picked up the truck. Made for a real fun move.

They charged me to fold the blankets which has never happened before. I'm never using this company again.

The only comment is in regards to pick-up through the app. There was a phone verification step from a friend, family member or an employer. I had not realized a phone call would go out immediately. As I had entered my driver's license and taken a photo, I though this step did not add value.

This Arlington drop off site is an auto garage - Uhaul business is an add-on. If you are needing decor - that is not the focus of this facility. Parking for return vehicles is behind the building in the alley off Arlington. All of the Uhaul depots were clustered in the north end of Wpg in sites that are somewhat distant from south end residents. The staff were very friendly and interested in my experience of the drive, the functioning of the vehicle, and future business. They were the best part of my Uhaul experience. There were no surprises or additional charges. I had much worse treatment from Hertz UK after rentin a sedan there in July 2018.