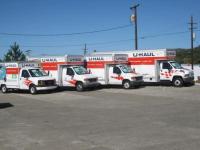 Area has very poor Wifi, so online checking in and returning is impossible. Business is open until 5pm, but people leave earlier. We had trouble picking up our vehicle and called the business, but they did not reply until 2 1/2 hours later. We are not the first to have this exact same problem. Read online reviews.

We attempted to rectify a lost key situation but were unable to until 2 days later. Meanwhile, the truck never left the lot yet we were charged almost $50 for mileage. Although this may be a rare situation, we ended up paying for U-Haul's inability to problem solve the situation, to include charges for non-use of the truck. We also received numerous calls about the truck and it appeared no one read the notes regarding the truck status, so we had to repeat ourselves over and over...

The truck had a flat tire. I reported this to the front desk attendant BEFORE I left. She came outside kicked the tires a few times and said it was the weather. She must think I'm stupid! I was old enough to be her mother and have driving more miles than she could ever imagine. So no! It was not a problem with the weather - it was a slow puncture. The air pressure was 32! With the wait I carried in that truck it was dangerous to have a problem with the tires. I swept out the truck and cleaned it to tue best of my ability. I have NEVER heard of paying for a rental to go to the car wash! So why am I being charged for this? Unreasonable! You made $547 from a faulty truck rental!

No one was there to help. The uhaul was covered in snow and ice. The key box was frozen over. The windshield wipers were broken once we were able the thaw out and undig the uhaul.

Nothing, pulled up, the lady showed me where to drop it, I unhitched it and was on my way, very easy

I found a dirty sock in the U-haul. I think that someone should at least go through and make sure nothing is left behind

Your company made me return the truck 30 miles away when there was a U-haul facility 2 miles and 6 miles down the road. Feel you did it for next user of the truck. Then charged me $45 to do so. Shame on you guys.

Pleasant and professional, a pleasure to work with.

Have a person at the location during the listed hours. something that did not happen at pick up or drop off..

Scheduled Uhaul rental for 4 pm with appliance dolly. Website, hours on door, and google all said they were open until 5 pm. I showed up to pick up my rental and no one was there. Must have called the numbers on the door (both of them) about 20 times and left messages. I received a call back about 4:45 pm and she got me the truck but couldn't get me the appliance dolly because she had â€œleft for the dayâ€. I had scheduled to pick the washer and dryer up at 5 pm. I asked if she could come back to get me the dolly because I was going to pick up a washer and dryer. She wouldn't come back for the same reason... â€œshe had left for the dayâ€. The place is supposed to be open until 5!!!! Bad business. No effort at all to satisfy the customer. Terrible customer service. Would not recommend to anyone.

Truck was ready, in and out in 10 minutes. Worked for us perfectly

While traveling there were several downpours. The truck did let water in. Several boxes and a futon had water damage.

The office person was very rude. We went to the office 3 times to pick up the truck and she wasn't there so we gave up and went the next morning, which put us a day behind on our move

Pick up was quick and Easy. This part does not concern this location as much as customer service. Customer service over phone was terrible when I first made the reservation they changed the location and the scheduler was not helpful until about 20 minutes into the call. They again changed my tow dolly to a auto transporter but we're charging me extra for the auto transporter. I called and that guy was great and fixed it.

I was happy with the vehicle but it was filthy inside the cab .I understand with the virus going on that the cab was never cleaned.my return in lebanon was great Micky was very helpful and I liked the lebanon facility and all the uhaul staff there.Wish to thank UHAUL for their help at this very stressful time and from my friend tiffany wills whose mom passed away thank you for helping get her moms belongings home

I was shocked to see my bill, $73 for 2 hours and 13 miles. Also, my credit card is still pending a $129 charge that was initially taken to rent the truck.

The cell phone service is terrible at this location. It took me at least 20 minutes to try to fill out everything & wait for it to load on my phone.

some one was there if I needed help

The App is terrible, and should be supported by free we-fi at sites that rely on it. There is a hole in cellphone coverage at the site in Bennington. The App would get to the final screen before losing connectivity. If I drove away to get a better signal, the App wouldn't complete the transaction because I was too far away. If I stayed at the site, the App wouldn't complete the transaction because of connectivity issues. If the App is required, please make Wi-Fi available at all sites.

Met all my needs

#1 have person behind counter knowledgeable of current policies I was informed at time of pickup at Bennington Self Storage that I was allotted 197 miles for my one way trip and that if my miles were less than that I would be credited if I was over I would pay extra. At conclusion of my trip I returned my uhaul with 177 miles traveled expecting a credit on my bill I was then told by the gentleman at uhaul that wasn't the policy and the other person was wrong. #2 When I initially picked up U-Haul in Bennington-VT I was told that was all set and had been inspected. I then left facility and about a 1/4 mile down the road I noticed the windshield was filthy I tried the windshield washer and no fluid would come out. I then pulled over and called the Bennington-VT office and spoke to woman there and explained the situation to her she couldn't believe it and said hang on a minute I'll check to see if I have windshield washer fluid.I waited 5-7 minutes on phone no one ever came back to phone in my disbelief I finally hung up the phone. I immediately called back the same number and my call went to voicemail I left my name and number and to please call me back. For the 2-3 hours I was loading my U-Haul up I constantly kept checking my phone to see if anyone had called me back about the windshield washer fluid but no one ever did. So I decided I would stop at a gas station and purchase some windshield washer fluid but I could never get the hood release to open the hood on the U-Haul truck so I had to drive 177 miles in a vehicle with no fluid and I had to stop on the mass pike numerous occasions to clean my windshield with the snow on the side of the road very dangerous to say the least I will never rent a U-Haul again because of this experience. What you can do to improve for the customer is to have someone who knows what there talking about and not give out misinformation to there PAYING customer. Also have a vehicle that has been properly checked for any discrepancies and one where you can access the engine.

We were told to leave the keys if no one was around. It wasn't quite that easy. I'm glad I had my phone with me, otherwise we would not have been able to return the vehicle.

The whole process reserving the truck online was fast & efficient. The truck was ready for me and the staff is great!