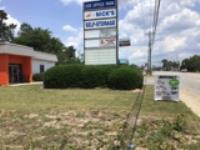 Complete Shit! I will never use this Junk again 45 minutes standing out in 30Â° weather on hold 8 times only to get hung up on again and again

It would be great if there is a person actually available to speak to a customer when the horrible app does not work (for Android). The app needs to be improved. I ended up having to get a third phone for the pick up. I then had to spend almost 40 minutes trying the app with 2 different phones for return. We had to finally give up on the app and use the website which finally worked. Very frustrating!

Nothing. Visit was perfect.. representative was patient and got me what I needed...

The 24/7 truck share experience was inconvenient. My pick up location had changed more than once. The time time it took to pick up truck set us back 1 whole hour. I was very disappointed.

Satisfied with the experience from a phone call to the return.

I was given a location 16 miles away from my location to drop my U-Haul off at. When I picked my U-Haul up the guy in reidsville stated that he was leaving my drop off at customer preference, because i was unaware of the area. This location had all the signs that he was a uhaul dealer so we dropped it off and I called the next morning. He was very rude and upset stating he was NOT doing the uhaul stuff anymore because of Covd-19, and that he couldn't help me with anything. He was rude.. i am very dissatisfied

Call in reservation was for 8:00 .the sales person put me down for 9:00 so online registration for lock box wouldn't work .I waited until they open to get the keys.he couldn't find my registration.so we checked out another truck,then I wanted to rent a furniture dolly but the new guy couldn't figure out how to rent it.then gas was not as noted 3/4 full but it was actually 1/4

Just dropped the truck off here. Used key dropoff box. Paperwork was completed/closed out the next morning and an alert email was sent in a timely manner.

The Rep was very professional and knowledgeable. Offered additional equipment that might was needed.

Needs staff that want to work

I was charged for two extra days even though my equipment was turned in on time-- an hour before it was due. So $80 more... I replied to the invoice email and called to file a complaint/report over a week ago and nothing has been done

Young man was 10 minutes late for work then the battery was dead in the truck putting us 45 minustes more behind schedule. He had people lined up waiting therefore I think another person should be scheduled to work the days they have many reservations.

Didn't have any problems at this location. They are friendly and helpful. The van was perfect for 1 bedroom and very well kept.

The only thing which you can't count for is having at least two employees on certain day's, which you don't have to wait.

Somehow the online system set me up for a 1-way rental when it was actually in town. Nick thought that was odd and corrected the contract, saving me money and time. Corporate needs to investigate why I was not given the option of returning the vehicle to the same location from which I rented it.

Nothing I can think of

At Nick's, the man was helpful while we were there, but he did not put our return in the computer. We turned it in on the 16th when we weren't due to turn it on until the 19th. We received a text about turning it in on the 19th - called Nicks, the man said he would fix it and have it as turned in on the 16th - we then called the 800 number later in the day and it still had not been taken care of - after speaking to her, (she was amazing), we received a receipt saying it was turned in on the 19th instead of the 16th and it mentioned late fees. I have not seen them charged. It was just added stress we didn't need with the move.

Mr. Aaron is such a pleasure to work with he always goes above and beyond for his customers. Nicks self storage is a good place to rent from and also convenient.

Absolute nightmare from the day of online reservation, to pick-up day, and return day. Nick's Storage in North Augusta was awful to deal with!! Aaron was rude, condescending, and not helpful whatsoever. He had absolutely no â€œpeople skillsâ€, nor was he interested in trying to help solve any of the problems at hand. Aaron insisted I go somewhere else and call 1-800-GOUHAUL because my problem was with them, and not his concern. His unwillingness to do his job was infuriating. He attempted to overcharge me the day of pick up, and again the day we returned the truck; even though the balance IN FULL was paid online the day the truck was reserved, and proof was presented to him. My contract was changed around numerous times in the computer system. Had I not screenshot the original conformation email, I would've clearly been taken advantage of. I will NEVER do business with UHAUL or any of their affiliates again, and I would advise anyone looking for storage or truck rentals, to avoid Nick's Storage.

Person we talked to on the phone didn't tell us about early pickup, and the key would not fit into the slot on the return box.