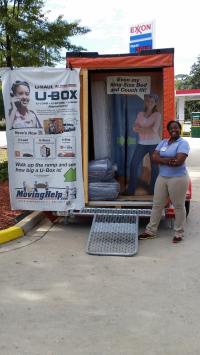 Storage lockers are generally reduced-height storage units. Located inside of a self-storage facility, these units provide the same security and convenience of traditional storage units.

Storage lockers are generally reduced-height storage units. Located inside of a self-storage facility, these units provide the same security and convenience of traditional storage units.

My storage unit had no light and the climate control unit was not as cool as I anticipated.

The staff was always very accommodating every time we came. They genuinely tried to help us out, which was especially appreciated since we were going through a difficult time. Parking in the storage access area is a bit cramped, but the staff gladly move their cars and will help you maneuver your truck if you have one.l

Would try to cut down on the homeless activity if possible. It’s a storage facility not a hotel.

The staff was super helpful! I love their energy and patience dealing with so many people during the times of COVID-19. I would definitely use this storage facility in future if the situation occurs.

I can't praise this facility enough on how I was treated from the first transaction to the last. I relocated from New Jersey to Columbia on June- 12th. I purchased my home on Aug.12. Rebecca and staff made the transition so easy and convenient. Thank you all!

July 15, 2020 Glen K. LaConey, Plaintiff, v. Jacqueline Matthews, Defendant. Re: DEMAND FOR PAYMENT Via Electronic Mail COMES NOW, the undersigned Plaintiff, Glen K. LaConey (“LaConey”), a customer of UHaul Self-Storage (“UHaul”), situated at 1037 Elmwood Avenue, Columbia, South Carolina 29201, seeking remedial and compensatory relief, based upon a pattern of harassment perpetrated by a Jacqueline Matthews (“Matthews”) against LaConey; and denial of authorized access to LaConey’s self-storage unit; and failure of Matthews to provide a climate-controlled environment for LaConey’s unit, while acting under, and by exceeding her authority as General Manager of UHaul. The facts in support of the within complaint are as follows: BACKGROUND: LaConey has been leasing self-storage Unit #E236 from UHaul since early 2019. UHaul represents that it is a “Climate Controlled” facility. The access hours are posted conspicuously. In late 2019, Matthews was assigned as the Manager of UHaul. Immediately after assuming her assignment as Manager, Matthews began a campaign of harassment against LaConey and certain other UHaul customers as follows: 1. Matthews has persistently locked the courtesy restrooms, then denied LaConey the key to the restrooms, on the pretext that “the lock is not working”. Customers have urinated in the stairwells and other areas of the facility, presumably for the same reason, as evidenced by the numerous threatening notes posted by Matthews, which LaConey has obtained. 2. Matthews, and other UHaul personnel, have persistently, and discriminately locked the doors to the inside units up to one (1) hour before the prescribed time, without notice, thereby denying inside customers access to their units, to the exclusion of customers leasing outside units. Matthews intimidates inside customers by hovering nearby with her arms folded, and demanding that all customers exit the building immediately, under threat of eviction. Matthews has been observed yelling to customers with inside units, “I’m tired! I’m ready to go home! I’ll lock up whenever the [expletive] I want to! I don’t give a [expletive]!” Effectively, customers with outside units enjoy unfettered access, once they pass through the security gate, to the prejudice of customers with inside units. Such arbitrary, discriminate and abusive practices perpetrated for the mere convenience of UHaul staff, are inconsistent with necessary safety and security measures outlined in the lease agreement; yet, they are consistent with the pattern of harassment complained of. 3. As stated above, UHaul represents that it is a “Climate Controlled” facility; however, the temperature inside Building E, where LaConey’s unit is situated, persistently exceeds 100 degrees F. Matthews utterly refuses to take corrective action, which, again, is consistent with the pattern of harassment complained of. 4. Most recently, Matthews has discriminately selected customers, who enter through the security gate on foot, to sign a logbook, to the exclusion of customers who drive through the gate, and/or who lease outside units, which, again, is consistent with the pattern of harassment complained of. LaConey’s claim is supported by video surveillance. ARGUMENTS: LaConey contends that Matthews has exceeded the bounds of her authority as General Manager of UHaul in furtherance of a personal agenda against LaConey. LaConey further contends that the discriminatory, prejudicial and abusive practices of Matthews, constitutes harassment, are violative of the lease agreement, and may violate the Civil Rights Act. Thus, because Matthews acted in her personal capacity to further a personal agenda, LaConey enjoys the prerogative to sue Matthews individually, and in her personal capacity, in lieu of suit in arbitration. CONCLUSION: Should this matter not be resolved to the satisfaction of LaConey, LaConey shall seek punitive damages in addition to the relief sought. Any evidence developed, during suit(s) against Matthews, shall be used against UHaul Corporation in arbitration. Matthews shall have twenty (20) days to respond to this demand before the matter proceeds to the magistrate’s court. RELIEF SOUGHT: 1. Remuneration of Five Hundred Dollars ($500.00) for the improper denial of storage access and for denial of a climate-controlled environment. 2. That Matthews post the permanently restricted access hours in a conspicuous location within five (5) business days of receipt of this transmittal; and to timely post notice of any further access restrictions, accordingly. 3. That Matthews cease and desist any, and all forms of harassment against, and abuse of UHaul customers. 4. For such other and further relief as the court deems just and proper under the attendant circumstances. Glen K. LaConey

Light is not working in storage unit.

THE STAFF WAS ABSOLUTELY INCREDIBLE. THE MANAGER JACKIE WAS SIMPLY SWEET AND AMAZING. HER EMPLOYEES MICHA, BRIANNA, APRIL AND QUINTON ALL HELPED ME DURING MY TIME OF NEED. THEY ALL CAME TOGETHER AND GAVE ME THE BEST EXPERIENCE THAT ANYONE COULD ASK FOR

Great personal service, however, while I was waiting in line, did notice how messy the area was behind the counter. Also, parking availability is virtually non-existent.

Q was very accommodating, professional, and helpful in the process.

While the location is not the best - lots in interesting foot traffic - the staff were always friendly and helpful. indoor facility was clean and I surprisingly never found any bugs or other critters. Thanks so much!

There were a few issues with the computers when I arrived so completing my paperwork took longer than usual. The young man that helped me was so courteous and he had such a warm personality that it made the wait more pleasant. Bad attitudes from anyone in customer service makes your experience worse. My experience was great because of the customer service of this young man. Thanks for doing everything you could to help me and my family! I love this facility!

Jacqueline is really great!! She made our first experience with a moving truck and storage very easy on us. And the young man that checked us out. We had a great experience. Thank you, Regina

Slow check in and check out. Was not told that the key for the gate was on the ring