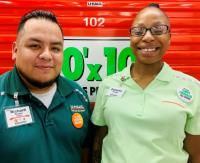 Thank you all: After my long drive here this staff was Excellent. Thank you!

The facility itself was fine but the staff at the facility is what brings the score down, except one grey haired gentleman who had owner on his badge and he is not the owner listed on the website. But, the owner on the website was just as rude as any employee there. When I went to access the unit, my access card was no longer valid and, an extra lock was on the unit. I was told it was because I did not use an approved lock style. Well, it seems my lock was working just fine because no one broke into my unit. And, what was really funny, the people who were locked out for non-payment had the same style lock I had on mine. So, I guess my lock did do the job correctly. Basically, they wanted me to buy a lock from them and since I did not I was locked out of my own unit. What really made the experience even better was, the manager/owner had to break into the lock he had put on my unit because they had lost the key. It took him all of 3 min, once he had all the tools and such with him, to get into my unit. How secure was this lock? I know my combination so it only took me 15 seconds and no tools. To wrap it up, I paid my bill on time. Had my unit locked with a solid lock and, was locked out of my unit electronically and with an "approved" lock. Basically, I don't plan on using U-Haul storage units any longer. I paid my bill on-time each and every quarter and left the unit in the shape it was when I first rented it over 2 years ago. I moved to another facility which was lower priced, larger, easier to access and, has friendly staff. Also our move was made difficult because someone had put a couch into the middle of the hallway and no one had moved it in over 2 weeks. I bet the couch is still sitting there as of this writing 4 days after moving out.

Moer help on sight would have been fast service.

Richard was very helpful and Informative and made me feel like my stuff was safe and secure at this facility. I would definitely recommend them as well as use them again if I needed to.

Expensive and come be better for the amount being paid

The staff was very friendly and helpful

Rickey and his team always took care of me. Any time I had a question or a need they took great care of me. If you are looking for a storage unit I highly recommend this location!

I've used storage units 3 times in my life and this one was definitely the best I've used so far. They were always very helpful and didn't hesitate to help me out with any questions I had.

Everything a storage facility should be and helpful staff members.